The French most popular and social gathering is called the aperitif or apéro! The years 2020-2021 will be marked by a transformation of this carefree and fun specific time into a virtual occasion with a preliminary choice of the few people to be invited in a private video room. The aperitif is the supreme example in France of a harmonious commensality and it is during this moment that the French people will reveal their true nature and be more receptive to strangers. In relying on this very human fact of sharing a meal with one or more regular guests, commensality encourages community solidarity, sociability and socialization processes. By itself, it reflects a part of the social organization of the society in which cooperation and conflict, harmony and disagreement should be manifested. 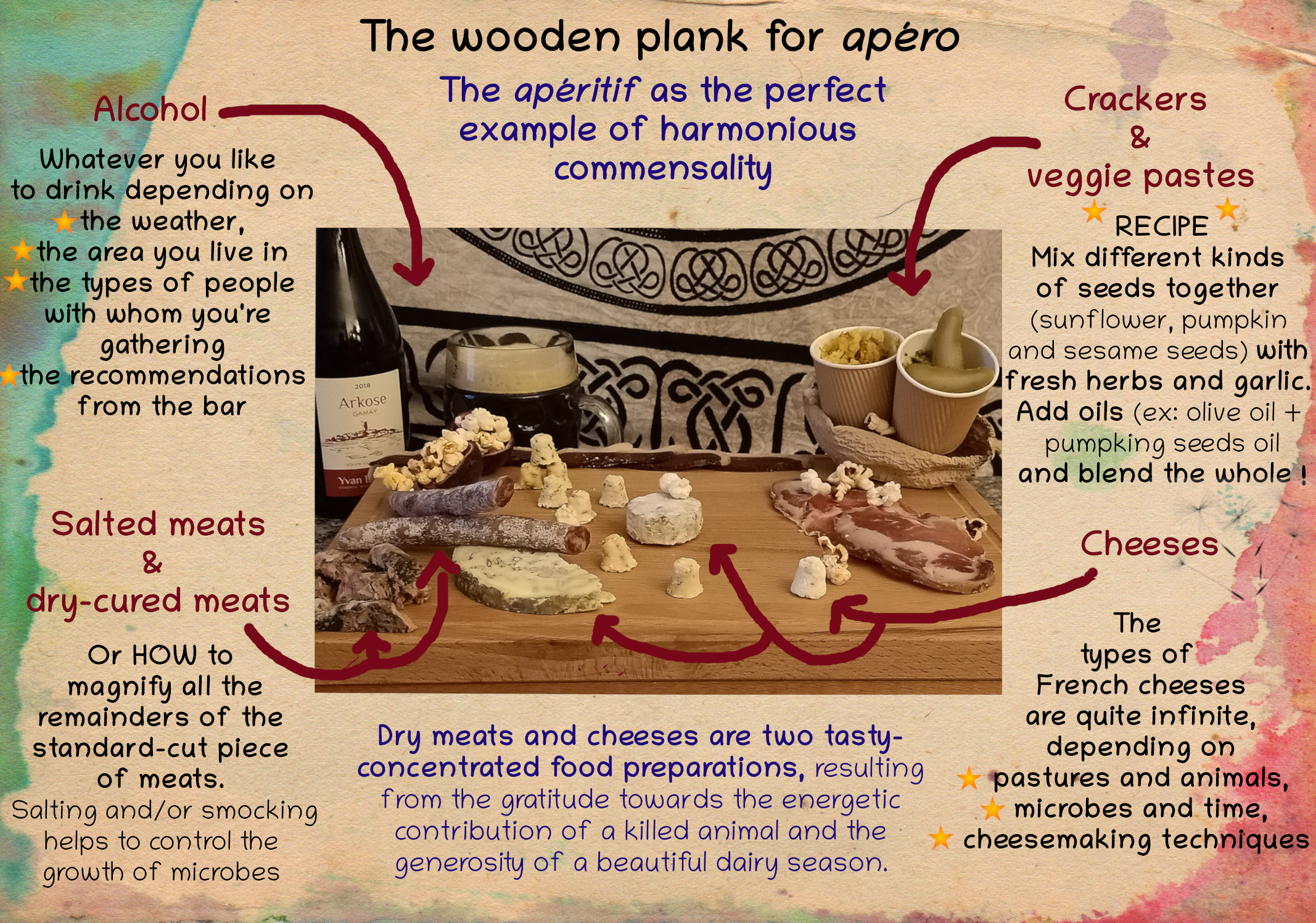 Let's treat our eyes with a beautiful and authentic aperitif plank! Based on the local know-how for the elaboration of terroir recipes, it is composed of meats, cheeses, olives or tapenades, pâtés - veggie or not -, light crunchy food - chips, popcorn, breadsticks - and any other small thing to pick. Item charcuterie or meats: these are simply products made from scraps, by-products, offal and fat obtained from the cutting of standard pieces of meat. The star is the sausage or saucisson. The various techniques used to prepare the sausage are used to increase the meaty flavor provided by the glutamic acid in the meat by 10 to 20 fold, thus giving our taste buds a state of addiction and ecstasy to this vitality nutritious concentrate.

Linguistic background? Opening the pores of the skin to eliminate toxins by drinking a very herbal aperitif. The alcoholic drink gradually became sweeter and less herbaceous/aniseed; it was accompanied by imported nuts (peanuts, cashews, etc.) to make an impression on the tables of French cafés: it was a rite of sociability acquired at the end of the 19th century, the aim of which was to share a moment outside the family home with other people and being seen.Although it was codified during the industrial period, the aperitif is still centered on the pleasure of eating and drinking well, which was previously a popular tradition where men toasted with their cups of beer and wine around festive dishes. At the time of writing, aperitif times where the discovery of authentic places and other individuals occur, are missing; in addition to this, the destructuring of eating habits and the rather normalized system of sharing culinary moments is turned upside down, consequently impacting social interactions.

Will society be able to overcome this temporary loss of a food activity that is the source of informal but essential kinship relationships? Elsewhere, tapas, mezzé, antipasti, zakouski, kemia also bring people together in a convivial atmosphere.

- Experience acquired from many years of practice